Four major types of loose-fill cellulose products have been developed under a variety of brand names. These are generally characterized as dry cellulose, spray applied cellulose, stabilized cellulose, and low dust cellulose. These types are used in different parts of a building and for different reasons. 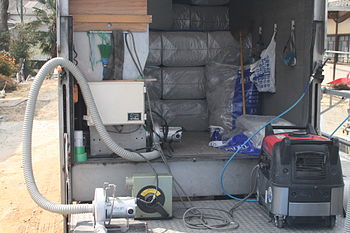 Dry cellulose is used in retrofitting old homes by blowing the cellulose into holes drilled into the tops of the walls. It can also be blown into a new wall construction by using temporary retainers or netting that is clamped in place then removed once the cellulose has reached the appropriate density. This form of application does settle as much as 20% but the stated R-value of the cellulose is accurate after settling occurs. In addition, a dense-pack option can be used to reduce settling and further minimize air gaps. Dense-pack places pressure on the cavity, and should be done by an experienced installer.

Loose fill in walls is an antiquated technique of using cellulose in wall cavities. The home performance industry and its accrediting bodies support the dense-pack standard of insulating wall cavities, which does not settle. This method stops the stack effect and convective loops in wall cavities. 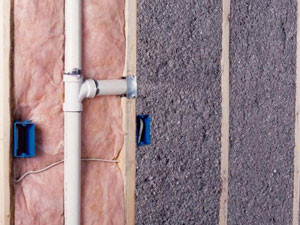 Spray-applied cellulose is used for applying cellulose to new wall construction. The differences are the addition of water to the cellulose while spraying as well as adding some kind of moisture retardant such as chlorine to prevent mold cultures. In some cases the insulation might also mix in a very small percentage of adhesive or activate a dry adhesive present in the cellulose. Wet-spray allows application without the need for a temporary retainer. In addition, wet-spray allows for an even better seal of the insulated cavity against air infiltration and eliminates settling problems. Wet-spray installation requires that the wall be allowed to dry for a minimum of 24 hours (or until maximum of 25% moisture is reached) before being covered. 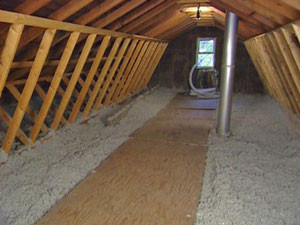 The last major type of cellulose insulation on the market is low-dust variety. Nuisance levels of dust are created during application of most types of dry insulation causing the need for simple dust masks to be worn during installation. This kind of cellulose has a small percentage of oil or similar dust dampener added. This may also be appropriate to homes where people are sensitive to newsprint or paper dust (though new dust will not be created after installation).

Stabilized cellulose is used most often in attic/roof insulation. It is applied with a very small amount of water to activate a type of adhesive . This reduces settling and decreases the amount of cellulose needed. This can prove advantageous at reducing the overall weight of the product on the ceiling drywall helping prevent possible sag. This application is ideal for sloped roofs and has been approved for 5:12 (41.66%) slopes.

Spray foam insulation is the best choice for energy efficient insulation in your new or existing home.

When it comes to insulating their homes, homeowners have many good choices. One option to consider is cellulose insulation, and it passes as a strong contender. Tightly packed cellulose provides a thermally efficient, cost effective and comfortable solution. Cellulose is made of 80% recycled newsprint which is chemically treated to resist fire, insects and mold. It’s no wonder that experts consider cellulose to be safe, “green” and efficient. Best Service In the industry.

Spray foam insulation is the best choice for energy efficient insulation in your new or existing home.

When Should You Need a Radiant Barrier?

Radiant barriers are more effective in hot climates than in cool climates, especially when cooling air ducts are located in the attic. Some studies show that radiant barriers can reduce cooling costs 5% to 10% when used in a warm, sunny climate. The reduced heat gain may even allow for a smaller air conditioning system. In cool climates, however, it’s usually more cost-effective to install more thermal insulation than to add a radiant barrier.

Radiant barriers consist of a highly reflective material, usually aluminum foil, which is applied to one or both sides of a number of substrate materials such as kraft paper, plastic films, cardboard, oriented strand board, and air infiltration barrier material.

Some products are fiber-reinforced to increase durability and ease of handling.